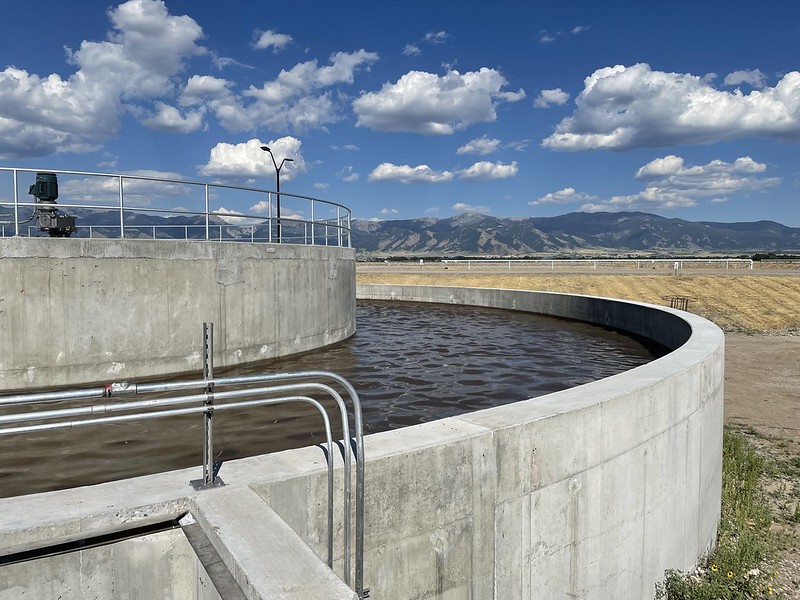 The oxidation ditches began operating at the Belgrade Water Reclamation in August 2022. Construction is scheduled to be complete in January 2023.

The City of Belgrade, Montana has started up its newly constructed Water Reclamation Facility with double the previous capacity. Since 2010, the population has increased by nearly 60% to more than 11,600 people. The town is about 10 minutes northwest of Bozeman, which is also experiencing a population boom of its own.

Belgrade’s previous wastewater treatment infrastructure was a three-cell lagoon system with a maximum capacity of 0.85 million gallons per day (MGD), which limited Belgrade’s ability to accommodate new homes and attract businesses to the growing city. The brand-new facility is located near Bozeman Yellowstone International Airport, with the Bridger Mountain Range to the east. Building from the ground up allowed the design team to tailor a custom facility for the City’s modern needs rather than rehabilitating the outdated system.

The project began with a Wastewater Facility Master Plan that was completed in 2017. TD&H Engineering led the project with AE2S as a subconsultant.  Engineers evaluated several activated sludge processes such as sequencing batch reactors, membrane bioreactors, the Modified Ludzach-Eddinger (MLE) process, and oxidation ditches.

“We had a goal of identifying a secondary treatment alternative that would meet Belgrade’s treatment objectives and provide an economical alternative that requires low operator intensity due to the workforce shortage that is affecting the entire U.S. An oxidation ditch facility was determined to be the best alternative,” says Brian Viall, AE2S Project Manager.

Oxidation ditches help to simplify the activated sludge process by strategically diffusing oxygen at fixed points in a continuous stream of wastewater as it cycles around a basin, or ‘ditch.’ As the waste stream flows around the ditch, it passes through zones of varying concentrations of dissolved oxygen – from aerobic conditions (very oxygenated) to anoxic (no dissolved oxygen) – that create ideal conditions to ‘activate’ the metabolisms of a living mass of microorganisms to consume the nutrients in the wastewater.  Some nutrients are consumed by cellular growth, and others are removed through cellular metabolisms, like dissolved nitrogen that is off-gassed as nitrogen gas.

“Our new Water Reclamation Facility will allow Belgrade to better protect the health of the local aquifer and has set us up to remain in compliance with the nitrogen limits of the City’s groundwater discharge permit,” says Steve Klotz, Belgrade Public Works Director.

Major construction got underway in January 2021, just as supply chains were becoming strained by months of manufacturing shutdowns and commodity shortages. Throughout construction, the procurement of building supplies was a top priority and a challenge.

The oxidation ditches started operating in early August and began discharging effluent in the middle of the month. Construction of the Belgrade Water Reclamation Facility is scheduled for Final Completion in January 2023.