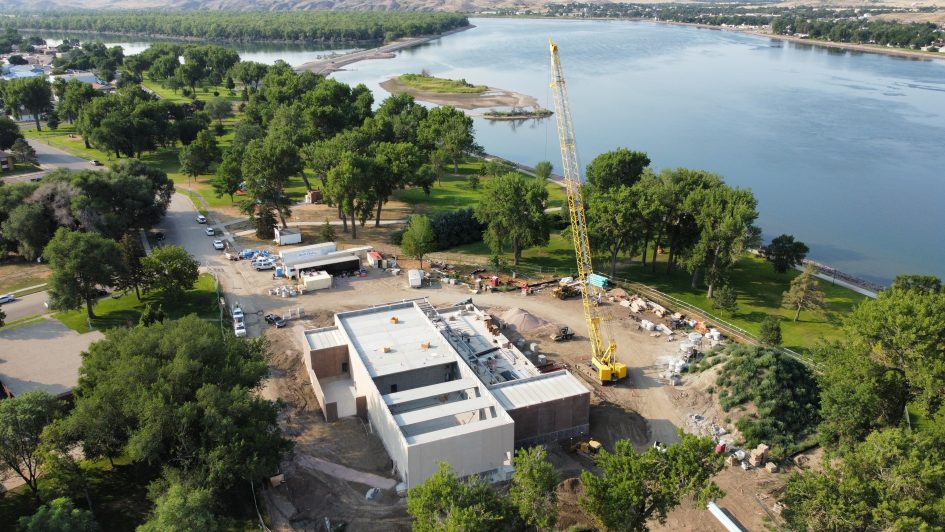 South Dakota’s capital city is about midway through the construction process for a new membrane drinking water treatment facility (DWTF) that will remove minerals that are hard on plumbing fixtures. The City of Pierre currently draws its water supply from 11 groundwater wells, treats the water at each well site, and then distributes it to customers. The water supply meets all State and Federal drinking water standards, but the treated water from wells fed by the Missouri Aquifer contains elevated concentrations of manganese, which forms dark brown or black staining when oxidized and can impart a metallic taste to tap water.

The project came about after a 2017 Comprehensive Water System Study conducted by AE2S. The study was undertaken in response to survey results that indicated Pierre residents had concerns about their water supply, including discoloration, flavor, water softening costs, and corrosion to faucets and fixtures.

Voters were given the opportunity to decide if the City of Pierre would build a $37.5 million DWTF with capacity for population growth. Residents overwhelmingly voted in June 2018 to approve the new drinking water treatment facility, with 73% voting yes, even though it meant raising their water utility rates by about $1 per day.

“This is one of the biggest local investments – if not the biggest investment – since Pierre was established back in 1880,” says Pierre Mayor Steve Harding. “This is going to set up the community for decades to come. We’re seeing history being made.”

Construction on the new facility began in August 2020.  “It’s very rewarding to be out here. You get to see something go from the plans to actual construction, knowing you’re making a huge difference for a community,” says Alan Tellefson, AE2S EIT.

Some of the most exciting days on the construction site occurred in March 2021, when divers from J.F Brennan Company, Inc. braved the icy water temperatures to place piles and support structures for the 720-foot intake pipe. The 24-inch pipe connects to the intake screen, which is constructed of a material that helps mitigate zebra mussels. Crews carefully bored the raw water pipe nearly 30 feet underground to connect with the new concrete intake caisson near the riverbank.

When it’s completed, the new membrane DWTF combined with the new source water from the Missouri River will eliminate the discoloration caused by the current groundwater source, provide 30% softer water, and create a sustainable water supply with overall better water quality for residents to enjoy.  The new membrane DWTF is designed with a capacity of 8.8 million gallons per day (MGD).

In addition to completing the Comprehensive Water System Study and the membrane pilot testing, AE2S designed the Pierre Membrane DWTF as a Construction Manager at Risk (CMAR) project. PKG Contracting, Inc. and Scull Construction Services Inc. have a CMAR agreement with the City of Pierre. The new membrane DWTF is scheduled to distribute water to residents in the fall of 2022.

Check out this video about the project!