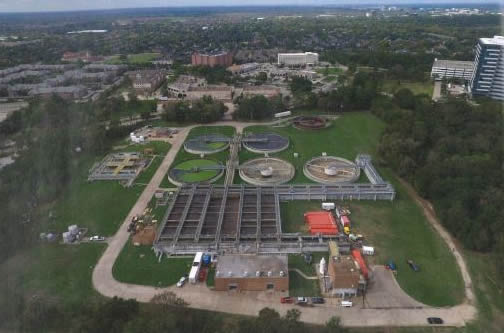 The 2017 hurricane season brought unprecedented damage to several coastal states, largely due to flooding.  According to Accuweather, the costs associated with Hurricane Harvey could be as high as $190 billion – possibly the most expensive natural disaster in the nation’s history.

AE2S had the opportunity to work with aquaTECTURE / waterTALENT to help the City of Houston recover from damage to its wastewater infrastructure that was caused by up to 60 inches of rain that fell in a short period of time during Hurricane Harvey.  Houston’s landscape contributed to the flooding issues.  “There are nearly 40 wastewater treatment facilities in the Houston metro area.  Oftentimes wastewater facilities are built in low areas to coincide with the configuration of a gravity collection system. In addition, Houston has a relatively flat topography, so there are many flood prone areas,” says Scott Schaefer, AE2S Wastewater Practice Leader.

Initially, AE2S was brought in for emergency response, with a primary mission to source treatment equipment.  “We jumped right in and pieced together a primary treatment system with pumps and mobile (frac) tanks. Then the scope morphed into a demonstration project to compare two emergency response treatment trains for secondary treatment with restrictive discharge limits, so we pieced together two systems from our equipment and vendor network with what was ‘laying around’ in suppliers’ yards,” says Schaefer.

Less than a year after Harvey moved out, the City of Houston’s existing wastewater system was fully operational.  The City is now looking ahead to infrastructure improvements that will result in a more flood-resilient utility. However, many residential areas are still struggling to recover, and rebuilding could take years.

If you want to read more about the Houston wastewater infrastructure recovery project, check out the Water Environment Federation’s (WEF) July 2018 issue of WE&T magazine.