This quarter’s employee spotlight is focused on an AE2S staff member who is a licensed Professional Engineer in nearly 30% of the U.S. – a whopping 14 states! Damon Chmela is based out of the Sioux Falls, SD AE2S office and serves as the Electrical and Instrumentation and Controls (I&C) Division Manager. His consonant-filled last name is pronounced as “Shmella.”

The native of Kimball, SD jumped at the chance to move back to his home state when AE2S opened the Sioux Falls office in 2014. His work focuses on a wide range of client needs, including municipal water, rural water, wastewater, heavy industrial, communications, and Supervisory Control and Data Acquisition (SCADA), as well as food processing, and lighting roadways and parking lots.

However, he still needed manual drafting skills when he went to work in the real world. “When I started, everything was done by manual drafting, and we used fax machines and hard-wired telephones for communication. CAD was just becoming popular, and we did not have individual PCs at our desks – we had to share a handful of PCs between about 30 staff. There was no Internet, and it was several years before we actually got our own PC at our desk,” explains Damon.

Obviously working conditions are much improved nowadays, with access to all the technology available in 2020. “I am excited about doing our first real design project out of the Sioux Falls office with the City of Sioux Falls Water Purification Plant and getting to know the staff who work there,” says Damon. “The Bismarck Horizontal Collector Well Pump Station is one of my favorite past projects. It is not often that you get to work on a project that looks like a spaceship on a sandbar near the Missouri River and includes all the special features that it did – medium voltage power distribution from the water treatment plant over a mile away, 600hp VFDs, translucent panels with backlights, just to name a few.”

Outside of work, Damon enjoys hunting, fishing, and staying busy with home improvement projects. “We built a house in 2019 that overlooks Lake Vermillion State Recreation Area in Canistota, SD, so there are plenty of seeding, landscaping, and other unfinished interior space improvement projects to get completed.”

Damon and is wife, Julie, have two adult sons, Derrick and Andrew, who also selected SDSU as their alma mater. After completing a four-year stint in the U.S. Marine Corps, Andrew is following in his dad’s footsteps by studying Electrical Engineering at SDSU. Derrick graduated from SDSU with an Agronomy degree.

As he approaches his 10th anniversary with AE2S, Damon says, “There is no better specialized water/wastewater consulting firm in the Midwest than AE2S. At AE2S we are passionate about water and how we can protect and improve water quality for all people. I like being able to be involved in project development and design and helping clients realize their dreams with the projects that we do for them.” 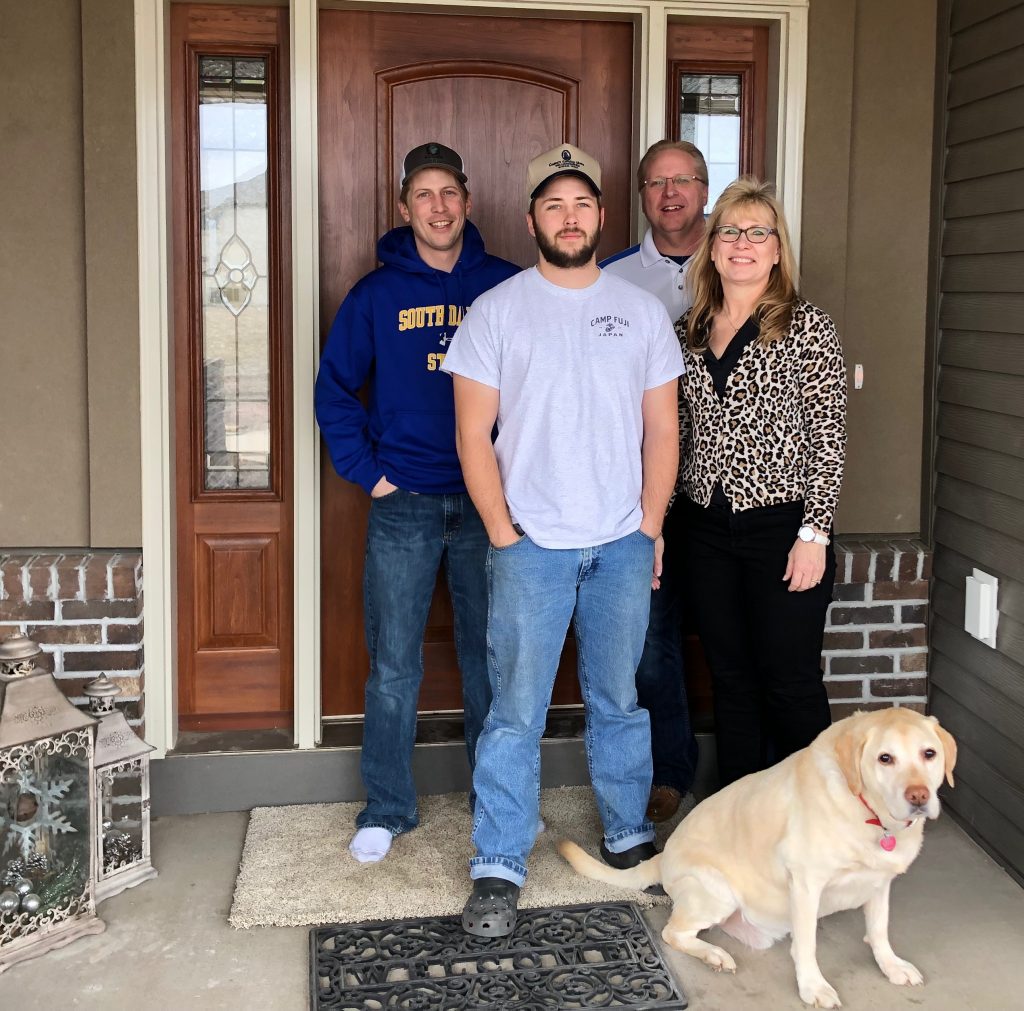 Damon with his wife Julie, sons Derrick and Andrew, and the family’s beloved dog, Duke, who died of cancer in 2019.