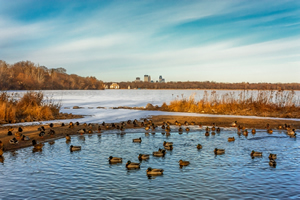 The public comment period for a proposed revision to the definition of Waters of the United States (WOTUS) will close on Monday April 15, 2019.  The U.S. Environmental Protection Agency (USEPA) and the U.S. Army Corps of Engineers (USACE) developed the proposal which includes six specific types of water bodies and eight categories of exemptions. The USEPA’s fact sheets cover the key changes.

The proposal by the USEPA and USACE is the second step in a two-step process to review and revise the definition of WOTUS to be consistent with President Donald Trump’s February 2017 Executive Order entitled “Restoring the Rule of Law, Federalism, and Economic Growth by Reviewing the ‘Waters of the United States’ Rule.” The Executive Order stated that it is in the national interest to ensure that the nation’s navigable waters are kept free from pollution, while at the same time promoting economic growth, minimizing regulatory uncertainty, and showing due regard for the roles of Congress and the States under the Constitution.

The USEPA says the proposed WOTUS definition would provide clarity, predictability, and consistency so that the regulated community can easily understand where the Clean Water Act applies, and where it does not. Under the proposal, traditional navigable waters, tributaries to those waters, certain ditches, certain lakes and ponds, impoundments of jurisdictional waters, and wetlands adjacent to jurisdictional waters would be federally regulated. It also details what are not “waters of the United States” – areas that only contain water during or in response to rainfall (e.g., ephemeral features); groundwater; many ditches, including most roadside or farm ditches; prior converted cropland; stormwater control features; and waste treatment systems.

In response to requests from some States, the USEPA and USACE are exploring ways the agencies can work with our Federal, State, and Tribal partners to develop a data or mapping system that could provide a clearer understanding of the presence or absence of jurisdictional waters.

Comments on the proposed WOTUS definition can be submitted via the Federal Register.